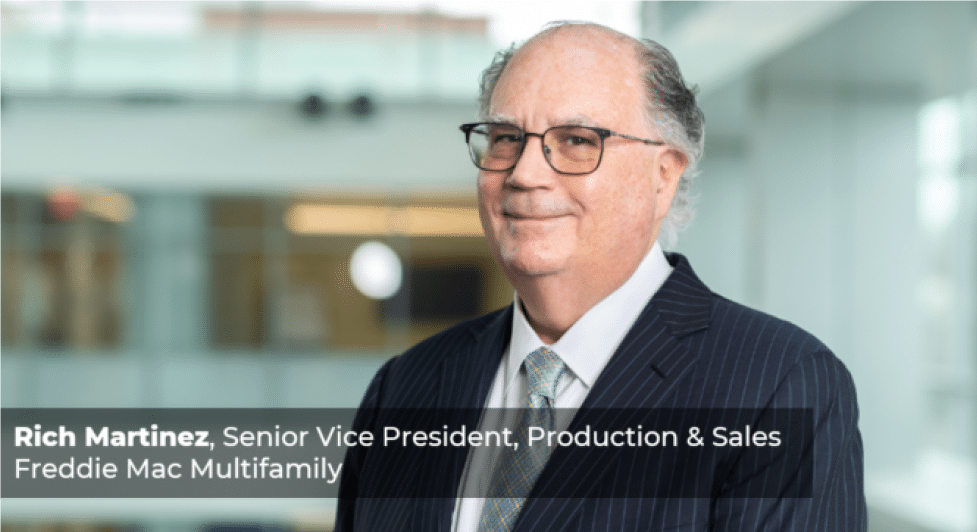 In retrospect, Freddie Mac’s decision to choose an industry veteran like Martinez — he has been with the agency for over thirty years — proved prescient. This was just one in a series of decisions that have enabled Freddie Mac to navigate the crisis — and to find itself, almost a year later, zeroing in on its caps.

We sat down with Martinez for an inside account of how Freddie Mac responded as the pandemic evolved.

A pandemic was certainly not on your radar — or really anybody’s radar — last fall when you took your new position. What was it like being thrown into something so unprecedented?

I’ve worked through numerous downturns before, but this disruption was unique in a number of ways. First of all, we all had to leave the office and work from home. We had to figure out how to collaborate virtually. Second, we couldn’t travel. This was a particular problem for us because we take great pride in our market knowledge and being in markets with our Optigo® lenders and borrowers. Third, many government offices were closed or just open for a few hours a day, which meant you couldn’t record mortgages or mortgage payoffs. That was a first for me. And fourth, there was the uncertainty we all faced. We didn’t know if collections and valuations were going to stand up.

You add them together, and we were looking at a combination of challenges that no one had faced before. It wasn’t fun to live through — there were a lot of 18-hour days, especially in late March and early April — but looking back, I think the experience has made us a stronger organization and opened our eyes to the possibility of doing business in new ways.

All that being said, Freddie Mac was prepared for a disruption. We have been incredibly focused on business resiliency and making sure we can withstand a pandemic, a natural disaster, or an act of terrorism. During the SARS epidemic in 2003, I was in Freddie Mac’s Chicago office and the point person for developing a response if it impacted a major city. We built redundancy into our systems and tested our operations with a percentage of our staff working from home. Whatever the crisis, we wanted to make sure we could continue to serve our lenders, borrowers, and investors.

How did the crisis unfold for you?

We started monitoring the crisis in mid-February and canceled all nonessential business travel by early March. I was out on vacation in late February, but when I got back, the concern had heightened quite a bit. We shut down New York on March 10, Chicago on March 11, and DC on March 13.

Things were moving so fast that Debby Jenkins, our executive vice president and head of multifamily, inaugurated a daily 9 o’clock meeting for our senior management team. Some days we had a follow-up session in the evening. At the same time, we realized that, sheltering in place, all our waking hours could be consumed by work. We tried to limit ourselves and stressed with our staff the need to find ways to get away from work.

We also understood that it was imperative for us to be as transparent as possible and communicate with our Optigo® lenders and borrowers. I started producing what we called the Rich Report on a weekly basis. It included a pricing chart and gave me the opportunity to talk about some of the changes we had instituted. Debby also held monthly calls for our seller network, and we had calls for our select sponsor group. We constantly posted information on the COVID-19 update page on our website.

As things have calmed down, we have slowed the pace of communications and management meetings. We are now down to three days a week.

Why don’t we walk through the challenges you listed and discuss how Freddie Mac responded to the ongoing crisis, starting with sending your team home?

My focus when I came in as head of production — for targeted affordable, SBL, conventional, and seniors housing — was creating a unified team. We have pursued this one-team concept even while working at home, scheduling weekly recap calls for all production sales groups and extensive one-on-ones with managers. Our goal is to remind people that, although we are apart, we are all working together.

As you mentioned, not being able to travel poses a particular challenge for Freddie Mac. How did you resolve that? And how did you deal with county and municipal offices being closed?

Our seller servicer network kept up to date on what was happening in their markets, as did our select sponsors. Their on-the-ground observations about local markets have proven invaluable. We are really appreciative of their feedback as well as their support throughout the entire crisis.

Having the recorder’s offices close down was a real curveball. And, of course, the problem was complicated because the closures were not uniform from locality to locality. There were a lot of questions that had to be worked out. Could a title company provide reinsurance? Could you record a mortgage electronically? Would investors be able to buy a bond backed by mortgages that are not recorded but are insured? It took our legal team a week to 10 days to sort through all the issues. One reason for setting up a debt reserve account was to cover incomplete due diligence.

And then there are all the issues created by the sense that we have entered uncharted economic waters.

Not completely uncharted. The forbearance program we announced at the end of March was historic in size, but it was modeled on the disaster relief forbearance plan we introduced in the wake of Hurricane Harvey in 2017. We had implemented forbearance on a limited basis to respond to subsequent natural disasters, including the California wildfires.

We worked with FHFA to make sure we included the protections they needed built in, and there was also some back and forth with Fannie. We all wanted to have a relatively uniform approach. We also decided that whatever we came up with, we could modify as circumstances changed.

Forbearance was a way of dealing with existing transactions. What were the constraints that your team operated under in terms of new transactions?

By April 1, we announced that we would temporarily narrow our focus on unstabilized offerings such as lease-up, value-add, and moderate rehab, as well as for student housing and seniors housing. We also suspended index locks and early-rate locks for all products. At the same time, we did all we could to facilitate immediate deliveries.

For our underwriters, the challenge was two-fold. We were in a volatile environment where there was no certainty that collections would hold up from week to week. Our solution was to accept deals with modified due diligence but require a minimum six-month debt service reserve.

The underwriting team also had to figure out how to conduct inspections. Fortunately, we had recently introduced Optigo® Happy, a digital inspection tool for tablets and smartphones, so we were comfortable with virtual inspections. We transitioned from that into doing inspections with Zoom, Skype, and other platforms.

Where do we stand now?

We are constantly monitoring and fine-tuning — and having four months of data to work with is enormously helpful. We gradually opened up and started getting back in the market in late May. Business started picking up, putting us on a steady pace toward the FHFA-set volume cap by year end, including targeted affordable housing. Investment sales, which had slowed in March, have also picked up, which means people are feeling more confident about values and income holding up.

By any measure, I think we have succeeded so far in our mission of providing liquidity and ensuring stability in the multifamily space. I am very proud of the way we transitioned from office to home in the middle of a pandemic. The first four to six weeks were very uncertain, but I think our team came through.

That being said, we are watchful. We are concerned about the resurgence of the virus and continued relief for the unemployed. But whatever happens, all the work we have done so far this year has left us better prepared to deal with any eventuality. Over the last few months, we have gotten a better handle on the tools available to us and how to use them.

You said earlier that the experience opened your eyes to doing things in new ways. Could you elaborate?

There are a number of things. Working at home has led us to explore technologies that we might have been reluctant to try before. Change is hard, and business change is harder, but the pandemic has forced us to embrace new tools for working together. That’s been a plus. And it has opened my mind to the possibility of interacting with our Optigo® community of lenders and borrowers more efficiently and effectively than we had in the past.

On a personal note, I learned that the flow of business doesn’t stop when you work at home. That was an eye-opener for me. Nonetheless, I am looking forward to going back to the office, running into my colleagues in the halls, and mentoring up-and-coming leaders. We may not need all the face-to-face time we had in the past, but personal relationships remain the foundation of our business.