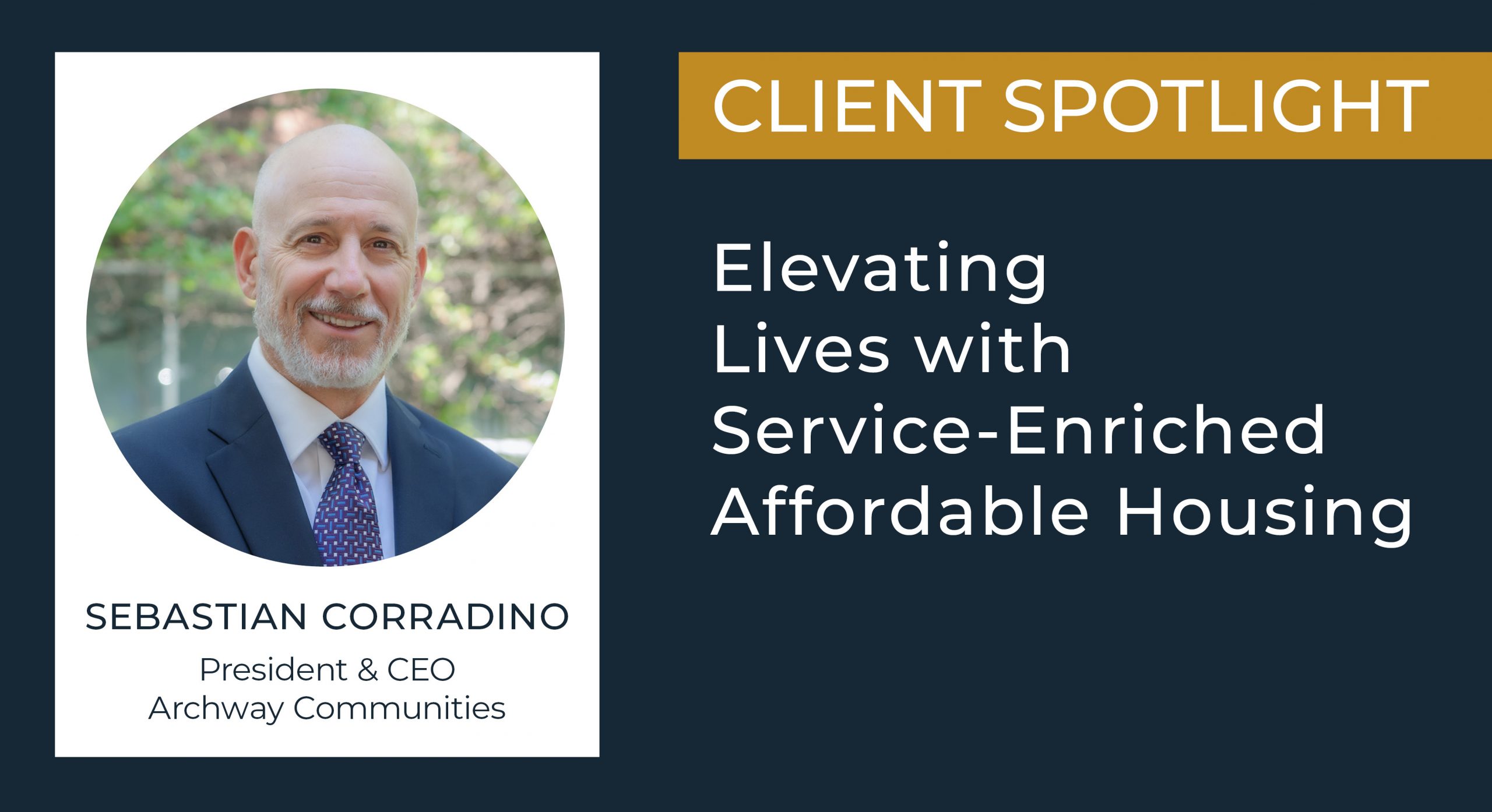 When Sebastian Corradino joined Archway Communities as president and CEO in 2020, the company had reached an inflection point. Its board, which included its two founding members, Robb Lapp and David Nestor, remained firmly committed to its goal of providing service-enriched affordable housing for very low- to moderate-income families in Colorado. But the board also recognized that Archway had fallen out of step. To succeed, it needed to adapt to an economic and regulatory environment that had become more demanding and complex than when it opened its first community in 1995. If Archway was to continue carrying out its mission, it had to put its financial and organizational house in order.

“My thesis was that Archway had assets that could be tapped to help us grow and that if we could do that, we could put together an organization that would be consequential in Colorado and perhaps beyond,” Corradino said. “We felt the state and local ecosystem for affordable housing would be receptive to a well-capitalized and business-oriented nonprofit, versus one that had been almost exclusively focused on social services.” In other words, Corradino believed that by running Archway as a real estate company, it would not just survive but flourish and have much greater impact in meeting the demand for affordable housing and services.

Corradino’s thesis has been borne out. Since early 2020, Archway has received significant financing commitments from state and local housing agencies as well as attention from affordable housing nonprofits interested in collaborating with Archway for property management and development partnerships.

But change has not been easy. Corradino has extensively renewed and expanded his staff. He has leaned heavily into technology, installing a series of software systems to automate and streamline processes while facilitating greater transparency, control, and collaboration, setting the stage for the significant growth that Archway anticipates. And with the leadership of Archway’s CFO, George Kelley, he has reorganized Archway’s finances, an initiative that included refinancing half its portfolio over the course of 2021. “Our approach has been anything but incremental,” he said. “In two years, we have completely retooled the organization.”

Corradino sat down with Lument to talk about the conditions required for a successful reorganization, the milestones Archway reached along the way, and the roadblocks that still have to be negotiated for Archway to maintain its momentum.

Lument: We’ll be talking extensively about the entrepreneurial outlook you’ve brought to Archway, but it would be useful to start this interview by emphasizing Archway’s social-service mission. Would you talk about your approach to offering services?

Corradino: Every one of our communities is different. We provide food bank supports, rental assistance, and after-school programs pretty much across the board, but we might offer citizenship training in communities with large numbers of refugees or recovery groups in those with people who were previously homeless. To make sure we are truly addressing our residents’ needs, we conduct community needs assessments and tailor programs accordingly.

We have also given considerable thought to how we finance these programs. When I walked in the door, there was not a single dollar of dedicated funding for services. One of my criteria for fixing the organization financially was to put our services on a sustainable basis. As part of this effort, we hired a fulltime fundraiser to build relationships with foundations and government agencies. The result: we are providing more services now than ever before, and we are working toward their financial sustainability, though we have quite a way to go on that front.

Lument: When you came to Archway, you clearly had your work cut out for you. What did you need to ensure you at least had a shot at being successful?

Corradino. Over the last 30 years, I’ve started a few businesses, and I’ve learned that, to be effective, you need people who believe in what you are doing. This starts with the board. If the board is not aligned with you, there are things you’ll never be able to fix. We’re fortunate to have a board with a problem-solving, entrepreneurial mindset and that is clear about what it wants Archway to be. That kind of alignment and clarity is also critical in the leadership team.  When I got here, I paid immediate attention to the leadership team and brought in people who were aligned with the vision of what Archway could become in addition to having the experience and capabilities to help us drive the organization to that place.  Our CFO George Kelley and Julie Stern, director of real estate, were two important early hires.

Lument: What are some of the other relationships that have been critical in placing Archway on new footing?

Corradino: There are probably too many to name, which underlines the fact that creating affordable housing is not something a developer can do by itself. That being said, we can’t really get anything done without resources from the two state housing agencies — the Colorado Housing Finance Authority and the Division of Housing in the Department of Local Affairs.  We go to great lengths to make sure they’re happy with us in terms of reporting and following up on the commitments we make. The City of Denver is also hugely important for us.

Then there are the capital markets. We can’t do what we do unless there are people willing to step up and provide financing. That includes organizations like Fannie Mae, lenders like Lument, and our tax credit investors. Building strong relationships with them means getting better financing terms and having more options when putting a deal together.

Lument: As part of your financial house-cleaning, you refinanced a number of properties with Fannie Mae over the course of 2021. How did this evolving relationship with Lument contribute to the process?

Corradino: We chose five properties for refinancing that we thought would provide the biggest bang for the buck in terms of debt service savings and potentially proceeds we could pull out of them.  We quickly learned that we really didn’t know our portfolio as well as we thought we did. In the process of refinancing, we found long-term use restrictions that we weren’t aware of and dormant lenders who had liens on the properties. Andrew Ellis and the team at Lument worked closely with us and coordinated with Fannie Mae as we cleaned up our ownership structure and simplified the capital stack, which necessarily took additional time.  Thanks to Andrew’s patience and diligence, we closed the deals in time to take advantage of low interest rates, which freed up several million dollars in capital for us while lowering our overall debt service obligations.

Lument also did an excellent job helping us turn two adjacent properties — with two separate HUD loans and two different ownership structures — into a single asset. That was transformative for us as owners and also for the community.

Lument: Where does Archway stand now?

Corradino: All the organizational, financial, and technological changes we’ve made in the past two years have set us up to move forward on a number of fronts. We are working with the Urban Land Conservancy here in Denver to transform four historic buildings at the former Johnson and Wales campus into 154 affordable housing units. We anticipate total project costs of about $60 million, and units will be ready for occupancy in 2024. These are beautiful buildings, and we are very excited about their adaptive reuse.

We are also working on a number of seniors projects. In Lakewood, just west of Denver, we recently broke ground on a three-story affordable housing community, Robinson Place, that will include 67 units for adults 62 and older. In addition, we are in the process of acquiring a 60-year old, 88-unit high-rise for seniors in Denver.

We are also looking for opportunities along the Front Range and on the Western Slope. We are focusing on several opportunities in Gunnison, about 150 miles west of Colorado Springs.  We are working on acquiring a 61-unit, Section 8 community and have land under contract for additional new rental units as well as possibly for-sale affordable housing.  One of the threads of our strategy is providing affordable housing for people who work in mountain resort communities.

As an organization, we have our roots in the Rocky Mountain Conference of the United Church of Christ, and we are working with several of its members to provide a second life for church properties that may be closing. The first of these is in Pueblo, and we have other possibilities in Montrose, and Salida.

Lument: Now that we’ve emerged from the pandemic, it’s clear that the need for affordable housing is more pressing than ever, yet the obstacles have also increased. What are the challenges you face in Colorado?

Corradino: Colorado has a housing deficit today of approximately 150,000 housing units.  So, we start there.   Meanwhile, we struggle with both increasing demand and extreme challenges relating to supply.   On the demand side, we need approximately 55,000 new housing units per year to keep pace with population growth in addition to the standing deficit of 150,000 units.  In the meantime, we’re producing only about 35,000 units annually.   To make matters worse, we are losing inventory every year to short-term rentals and second and third homes. The problem was acute before the pandemic, but now it’s a full-blown crisis. One data point that really brings the point home about the gap between supply and demand of single-family homes, as one slice of the housing pie, is this:  between May 2020 and May 2021, the price of single-family homes rose 25 percent.

You see the same kind of situation in affordable housing. Pricing has gone through the roof while interest rates have jumped significantly, and they are going higher.  Today, I can borrow less than I could before the pandemic, and because of escalating labor and material costs, I can do less with the dollars that I am able to borrow.

Growth cap initiatives also present challenges to the development of new housing here in Colorado.  The stated rationale is to limit growth in an effort to keep communities “livable,” but the effect is to keep people out and limit much needed redevelopment of old assets. If we’re to have a better future in Colorado, we need to think hard about what these initiatives are actually accomplishing and work toward a more inclusive conception of livability.

We also need to look at the programs we have in place to support affordable housing and see if we can’t streamline things to help accelerate production.  Too often, the public programs that are in place to promote affordability are poorly coordinated and simply don’t work as well as they could or should.  I say that as a taxpayer and as an affordable housing developer.

At this time, Colorado has an unprecedented level of public funding available to support affordable housing.  That’s the good news.  However, the challenges around interest rates, costs, and local opposition are significant.  My hope is that our state and local housing leaders will see this moment as an opportunity to explore new ways of streamlining and accelerating housing production.